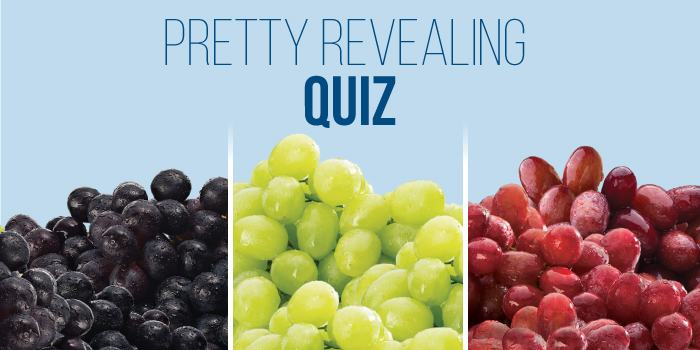 Did I get your attention with that snazzy headline? Probably…um…no. The only thing more tired and out of date than the term “snazzy” is a clickbait headline. Also tired and out of date? The omnipresent social media quiz. Which Harry Potter character are you? Which Disney princess are you? If you were a Tupperware bowl, would you be dishwasher-safe? Seemingly, there is no subject or thing too mundane for people not to wonder if they are it or what kind of it they would be. But, c’mon…admit it, you don’t always hate them. And if you’ve just had a particularly stressful meeting (Zoom or otherwise), sometimes a good ol’ Are you a Targaryen or a Lannister questionnaire is just the thing to soothe those frayed nerves.

So, while you may already know that you’re Snow White and dishwasher-safe…we’re pretty sure you don’t know what variety of Pretty Lady grape you are. And why is that? Well…because I’m only writing the quiz right now. As we speak. Or, rather, as you read. Just wait for it. Here comes the first question…

If you were a summer day you would be…

If you were a piece of clothing you would be…

b. A pair of socks

If you were a pizza topping you would be…

If you could own a prop from any movie, it would be…

Now, to very scientifically determine which currently-in-season Pretty Lady grape you are, I’m going to do what all social media quiz creators do: I’m just gonna make stuff up!

If you picked mostly “a”

If you picked mostly “b”

You’re rich, crisp, and delicate. It’s hard not to like you, which is probably why everybody does. You’re a Scarlet Royal red. (Available August–November)

If you picked mostly “c”

If you picked mostly “d”

You watch too many Marvel movies.