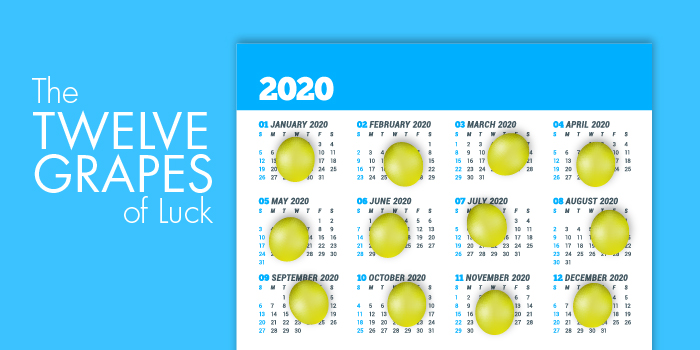 At Pretty Lady Vineyards, we find great joy, luck, and prosperity come from working with grapes throughout the year. But there’s an old Spanish tradition that insists grapes and luck truly go hand in hand: right at the stroke of midnight on New Year’s Eve.

The tradition has been around since the turn of the 20th century. Back then, a group of growers in the province of Alicante of Eastern Spain popularized the practice of having people eat 12 grapes on New Year’s as a symbol of good luck for the coming year (a brilliant and effective marketing strategy, right?)  As the tradition was embraced by more and more people, it spread across Spain, Europe, and then many other parts of the rest of the globe. In our modern word, the custom is very popular in Hispanic cultures, The Philippines, and right here in the United States. In some places in the world, people believe the act of eating grapes right when midnight strikes on December 31st can even help ward of witches and evil spirits. In fact, many individuals in Spain take part in the act more out of superstition now than anything else. It’s not just that eating 12 grapes at midnight can help you have good luck in the coming 12 months; it’s that not doing so might bring about bad luck!

Most versions of the practice involve eating 12 grapes right at midnight, oftentimes in sync with the 12 strikes of the hour. While this added challenge isn’t necessarily required, it does make for a fun competition, assuming everyone plays safely and is careful not to choke. On that note, of course we recommend seedless grapes for this activity!

Grapes aren’t the only food people eat for good luck on New Year’s. Other traditions around the world include eating:

Regardless of what New Year’s Eve tradition you take part in (even if it’s just toasting champagne and kissing someone special with the ball drops), we want to wish you a safe, happy holiday and look forward to *seeing* you more in 2020.